My Journey (so far) to Serve

One of the faces that drives my need to serve. 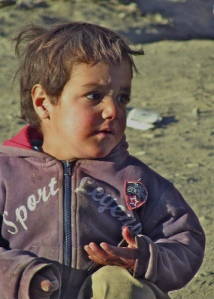 I am not sure exactly when or how my desire to work for the greater good started. I grew up in a small town in the 70s and 80s and the role models for what girl from a poor family could be were pretty limited — even if she was a really good student. I do remember that one of my middle school dream jobs was to be a photojournalist so that I could tell the story of those who needed help. In high school I dreamed of getting a public relations degree so that I could work for nonprofits and educational campaigns. Sadly following those dreams were beyond the resources I had available to me at the time.

I finished high school living in my own apartment. I managed to find the means to enroll in a junior college. I remember very clearly my thoughts when I was asked to declare a major. I mentally ticked off the three things that I thought were options: nursing, teaching, and accounting. Nursing was not an option. Though my family has several health care workers, I do not have the interest, personality, or set of strengths for that work. At that point, teaching was not an option as I was terrified of speaking to groups. That left accounting though I am not sure why it was on the list of possibilities.

After a year, I transferred to a regional university and continued my journey toward a CPA license. I quickly realized this was not the path for me. I looked at my transcripts, the university catalog, and what I saw as possibilities in small towns in western Oklahoma and tried to find the most efficient path forward. Efficiency was important because I was never sure how long I would be able to afford to attend college. I settled on an office management major with a criminal justice minor thinking that I could find work as a legal assistant.  During this time I was also active in the Jaycees and worked either a full-time job or a combination of part-time jobs including one at a battered women’s shelter. Through Jaycees I was battling my fear of public speaking by entering speech competitions and failing miserably. I was dreaming small and focusing mostly on making ends meet each month.

The day I walked into David Wright’s Introductory Sociology class everything changed. The curtain fell away and an amazing world opened to me. A world so much bigger than my experience had ever suggested. I eventually overcame a fear of statistics to change my major to a double degree program in sociology and office management. With Mr. Wright as my advisor and mentor, I learned to dream bigger, to believe in myself more, and to embrace my desire to work for the greater good. One aspect of this journey was participating in a group that he co-led which worked with men serving life prison sentences.  Actually having the means to finish my degrees began to look like a possibility and then a probability. As the first person in my family to go to college, graduate school was not part of my plans . . . yet.

With a great deal of encouragement from my professors at SWOSU, I decided to try and earn a master’s degree. The goal was to find work helping to reform the very broken prison system from the inside.  I kept poking at my public speaking fear until one day I won that battle. I started to dream of living in Oklahoma City and working for the Department of Corrections. Having traveled outside the state of Oklahoma no further than one trip to Dallas, it didn’t yet occur to me that I might go further in life than Oklahoma City.

More gentle prodding from those who saw more in me than I saw in myself and I found myself accepted into graduate school in Louisiana. In graduate school my world kept expanding. I discovered a talent for teaching. I saw the possibility of working for the greater good by giving to others what Mr. Wright and my other professors had given to me – a new view of the world and a new belief in myself.  With this plan I headed off on a path to earn not only a master’s degree but also a doctorate. I am lucky in that I am good at learning, at quantitative research, and thinking theoretically. That led to mentors and others having big plans for me. I embraced those plans even though they pulled me from my true passion of working for the greater good. The goal became the academic holy grail of a tenure track position and then tenure at a research university.

Fast forward 16 years of  trying to fit my heart’s calling into the nooks and crannies of an all encompassing career in higher education as a faculty member and then administrator. I did far more than my share of university service. I tried to work one national disaster relief operation each summer. I served my local Red Cross chapter. I served as faculty advisor to student groups. I tried to convince myself that I was doing enough but it didn’t feel like I was telling myself the truth. The comfortable life that was unfolding felt like a long path to selling myself and my dreams short.

One afternoon in Mid-May, I saw a position announcement for an administrative job at a university in Afghanistan. I joked to friends about applying. I didn’t mean it . . . at least not at first. Then the idea took root and I applied never dreaming they would take me seriously. The beginning of August found me in Kabul which is a very long way from small town Oklahoma.

I spent a year in Afghanistan. During that time, the inner voice that calls me to service grew too loud to ignore. That voice was inspired by the sight of little boys not more than four drinking out of puddles on the street — puddles that were contaminated with animal and human waste, pollution, and all manner of germs and parasites. It grew louder, each time I looked into the faces of the young women in the courses I taught.  I watched the light in their faces grow as they learned and spent time with those who believed they could do great things with their lives. I worry for what the future will hold for them when the international forces leave the region. I saw the strength, the resolve, the courage, and the goodness in a people that many seek to demonize.

The bubble in which I lived and worked in Kabul became too constricting. Though the intentions were good, I worried that we (the collective international we) were doing more harm than good. Higher education continued to feel too constraining.  I could no longer deny my greatest motivation and desire — my soul’s calling to be of service. Not service from a distance, safely conducted from a university campus but a life spent directly dedicating myself to empowering people, to building community, to working for a safer, saner, more just, and more resilient world for the many not the few.  The big question was how to go about making this transition. Applying for jobs from Kabul was not feasible. While back in the US for a vacation, the universe offered me a way to start the transition in the form of an AmeriCorps year of service.

Spring 2012 finds me nearing the completion of my year of service and exploring the next steps on my path. My goal is a position that allows me to use my skills and talents (i.e., strategic, problem solving and analytical thinking; helping those with differing views find common ground and weaving web of cooperation; synthesizing large amounts of information quickly; being really good under pressure and creating calmness in the midst of chaos and crisis; communicating in many forms; turning numbers into actionable information; asking the question that moves the conversation forward and/or gets to the root of the matter; and learning new things quickly and being able to teach others what I have learned) to work for the greater good while still taking care of myself and keeping Sallie Mae happy by making my student loan payments.

I am a product of Head Start, public schools and universities, social security survivor benefits, the student loan program, the AmeriCorps programs, the caring village of my childhood, and a web of friends and allies in my adulthood. My definition of success may not look like those of the majority. My path may be unusual and it may grow more unusual as my journey continues to unfold. Still  I think the tax dollars invested in me have been a pretty good deal for the American public. It is time to start working even harder to be sure that programs that giving others similar opportunities continue to exist and to help those without such access find ways to live their dreams.

It has been a long trip from a small town girl in Oklahoma who wanted safety and security more than anything to a woman who is willing to consider long- and short-term adventures in service pretty much anywhere in the world including those places with State Department warnings. So my answer to Mary Oliver’s question, “what is it you plan to do with your one wild and precious life?” is that I plan to serve; to empower others at every opportunity; to never stop learning; to believe in a safer, more just, and more resilient world, and to never stop doing what I can to help create that world.